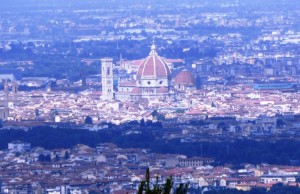 At the junction of the old Via Aretina with the new route (today Via Roma) opened in 1761, where the climb to the Hospital of Bigallo begins, a spout pours into a pile of stone.

This is the sign that demonstrates that a fountain of spring water existed here which, in the Letters of 1584, was described as the Fountain of the Pidocchio (Louse).

Tradition attributes the name to the fact that upon getting washed (or rather, delousing) at this fountain which must have been much larger then, the troops of Charles V, descending from the pass of San Donato in Collina towards the conquest of Florence, bivouacked near the fountain leaving a lot of those small insects which gave it its name Pidocchio (Louse).

Residents of nearby houses have never accepted this despicable nickname, however, it has remained for centuries in official cartography, until, in 1926, with a municipal resolution, they managed to simplify the name of their village to La Fonte (The Fountain).

Emperor Charles V had given command of the Spanish army to Philip of Orange who, by order of Pope Clement VII, was marching on Florence to subject it to the empire and put an end to the Florentine Republic. On October 14th, 1529, once they had crossed the pass a few hundred meters above the fountain and after a sudden bend, the wonderful spectacle of the city with high towers and gorgeous palaces appeared. Indeed: Florence appeared from the Apparita hill!

The Prince had a moment’s hesitation and, addressing himself to the Florentine exiles who had enlisted and militated against their city, said, “If I had such a beautiful country, I would defend it.”

The Landsknecht, however, other mercenaries paid by the Spanish army, preparing themselves to plunder, cried out: “Mrs. Fiorenza, prepare your brocades, we’re coming to buy by the pike!”

Two different visions, stimulated however by a single breathtaking panorama.

Giosue Carducci reminds us that the place had already been chosen because of its amenities in the fourteenth century by Sennuccio Del Bene who, having been banished from Florence, complained of not being able to go back: “But I will not be able to see my flourishing city from the Apparita hill to the plain any more.”

Over the centuries, the Apparita hill has been chosen by wealthy Florentine families – and, not least, the Rosselli brothers – to build their villas which, during the last war, were occupied by the Germans to place their strategic commands.