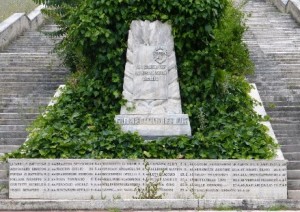 “The Cala-mai have come down to liberate you, the Florentines,” was written in the leaflets dropped by paratroopers of the 1st Squadron of the Ricognizione Folgore (Thunderbolt Reconnaissance) as they passed through Ponte a Ema in 1944.

They were called the Cala-mai because for a long time they never parachuted for war actions. But this wasn’t a disrespectful epithet, those very soldiers used that name to distinguish themselves. This is their abbreviated history: after the armistice of the 8th September, 117 paratroopers of the famous Nimbus Battalion found themselves dispersed in Calabria. With patriotic spirit, they gathered around Captain Carlo Gay, determined to continue the war against the Germans and on the 9thDecember 1943 they formed a regular unit which the allies dubbed the F-recce Squadron. They took part in the Battle of Cassino and the liberation of Rome, losing ten men, then went up the peninsula towards Florence. The first patrol of Squadron F arrived in Ponte a Ema on the evening of August 5th, 1944 from the Chianti. At noon on August 7th, the entire group left the country road to turn towards the Ponte a Ema operations base where they were welcomed by an impenetrable German artillery shelling. Despite the fact Via Chiantigiana was under constant enemy fire, a truck left to go pick up food and ammunition but, having reached the farmyard of the farmer Guerrini, was hit by a German cannon. Seven died and they were buried in a place close to that of their sacrifice, on a farmland on Via Chiantigiana at the corner of the current-day Via Ferrero per Bagno a Ripoli. A week later, was also buried the Lieutenant Manlio Cappellani of the same squadron F was also buried, who fell during the liberation of Florence. The unit continued its activities with air-drops beyond the Gothic Line losing seventeen other paratroopers until it was dissolved on June 25th, 1945 with a ceremony in the Roman Theatre of Fiesole. The thirty-five tombs were gathered in the field of Ponte a Ema, which was the only cemetery for the Cala-mai. After the war, the small military cemeteries were destroyed, but in 1971 a remembrance of what happened at Ponte a Ema was made with a marble stone which remained there until April 20th, 1980 when it was transferred to the foot of the steps of the primary school Vittorino da Feltre, a hundred meters away on the same road to Florence, to which were added some marble blocks with the names of 35 paratroopers. 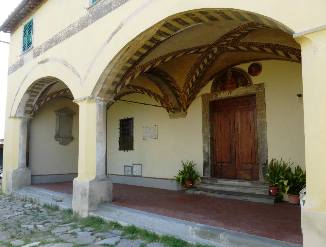