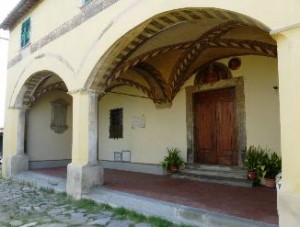 The Signoria del Trentesimo (Lordship of the Thirtieth) or of San Antonio had their residence at San Lorenzo parish in Vicchio di Rimaggio and kept their banner inside the church. Its members gathered under the porch which, at that time, had three arches and had a stone fireplace at the back.

This lordship was one of many Potenze and Signorie Festeggianti (Powers and Celebratory Lordships) active in Florence since the 14th century: brigades of freely constituted workers whose purpose was to organize celebrations in their area. For this reason, they were tolerated and controlled by the Princes of time who allowed them – only during the festivities – to imitate their ways and their clothing and attributed themselves titles like King, Duke, Marquis, Earl and Emperor.

The Lordship of the Thirtieth was dedicated to San Antonio, protector of animals, so we believe that, predominantly, the subjects were the peasants who took care of the stables and at that time there were many. In fact, each Power brought together the workers of one category, had its own banner and a Lord guided them. For example: the navicellai (sailors) of Rovezzano responded to the Duke d’Arno who had his seat in Piazza delle Travi in Florence, the lavandai (launderers) of Rimaggio were subjects of the Duke of Scodellino and the Signore dell’Olmo and gathered under the elm in Piazza San Niccolò, the leaders of the millers were the Duke della Nebbia and Count Mota, and the Marquis della Rete commanded over the fishermen of the Arno.

Participating together – one or more times a year – freely, in masquerades, with stone-throwing and all sorts of entertainment, also stimulated the growing aspirations of associations and these acts, no longer for recreational and amusement purposes, led Grand Duke Ferdinando II, in 1629, to outlaw the ancient Powers for reasons of public safety because, if they had found a leader to guide them politically, they would surely have undermined the power of the Medicis.

Therefore, probably as a result of this order, the priest of San Lorenzo a Vicchio began to mistreat the Lordship of the Thirtieth which was forced to move to Candeli. The Ripolese peasants would only return many years later and on January 17th, 1690, they reunited under the porch for a hearty lunch.

The Lordship of the Thirtieth continued to exist without great enthusiasm and was officially abolished in 1785.