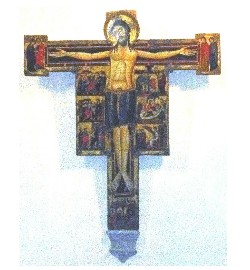 In 1957, the mother abbess Ildegarde Cabitza, compiling the history of the monastery of the Benedictine nuns of Rosano, wrote that, “at the back of the church above the baptismal font was hung an ancient crucifix painted on wood.”

The black and white photo reproduced in the book is mostly illegible due to the bad condition of the work. It had been generally attributed to the twelfth century, and no one had yet understood, or even imagined, that it was the oldest pictorial work on Italian wood.

After more than eight centuries, in 1994, the Opificio delle Pietre Dure began restoration works, never made until then. In 2006, the Crucifixion has been replaced in the apse of the abbey church with colors of an extraordinary brilliance returned to their former glory and Jesus with big open eyes surrounded by scenes from the Passion and, interestingly, nailed with four nails instead of three.

However, there is an aura of mystery around this precious painting. During the restoration a hole hidden in the vertical arm of the cross was discovered, inside which appeared a fragment of bone and a small stone cross similar to those that the crusaders brought back from the Holy Land. Very often they made people believe that they were pieces of the Holy Sepulcher.

Researchers have hypothesized that the small relics belonged to Guido Guerra I of the rich family of Guidi counts who participated in the First Crusade and who died in 1124 as a result of an illness contracted in Palestine.

In 1129, the widow Imilia ordered the complete restructuring of the abbey of Rosano on the occasion of the robing of her fifteen-year-old daughter Sofia as a cloistered Benedictine nun. She also donated gold, precious stones and lands in Rimaggio and her son Guido II gave the silver from his horse’s saddle to make the cover of a book of the Gospels.

Perhaps it was then that the Crucifixion was commissioned to an unknown painter – conventionally called the Maestro of Rosano – as a dowry for the monastic vows of Sofia Guidi and the mysterious relics were hidden in memory of the crusader Count Guido Guerra. The date would coincide with the results of the Carbon 14 examinations which the chestnut wood has undergone which have dated it between 1120 and 1130, therefore older than the Crucifix of Sarzana in 1138.