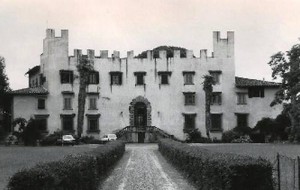 In Pian di Ripoli, in the middle of a forest of modern buildings, appears an impromptu building with Guelph battlements. This is the Castle of Bisarno with a wide promenade and a Renaissance entrance staircase at the sides of which jut some slender and tall palm trees, unfortunately in very poor condition.

Odoardo Beccari had planted them, “the erudite scientist and fearless traveler who gathered valuable elements of study in the African regions.” In fact, he spent many years in Asia, Australia and New Zealand as well as in Eritrea and Ethiopia. In 1855, barely twenty-two, he followed his friend Rajà of Sarawak into Borneo where he organized a naturalistic expedition along with the Marquis Giacomo Doria who soon had to abandon due to a serious illness.

Odoardo remained alone in the forest living in a hut for three years (which he named in honor of the Vallombrosa monastery near Florence), which was built oblivious to the many dangers he faced every day: from leeches to venomous snakes, from headhunters to various hostile tribes. Despite everything, he managed to collect a huge variety of plants, dedicating particular interest to the palm trees of which he classified 130 species.

This expedition was followed by others which gave him the opportunity to enrich his botanical, zoological and ethnographic collections, now in the Natural History Museum of Florence.

Because of his gruff character he never had good relations with the Florentine academic world but managed however to establish himself and to obtain different awards. Various kinds of plants and animal species he discovered were named after him. Suffice it to recall the Amorphophallus titanum, the largest inflorescence in the world that reaches two meters in height and three in circumference, accompanied by a single leaf six meters high with an awful rotting smell, now treated with the utmost care in the Botanical Garden of Florence where it flowers once every two or three years.

After long stays, always alone, in unexplored places, Odoardo – who was also a city councilor in Bagno a Ripoli 1879 to 1893 – retired to his estate of Vignavecchia in Radda in Chianti to cultivate vineyards and to the Castle of Bisarno where he died on October 25th, 1920.

His exploits as an explorer and traveler inspired an unknown writer who began to tell tales of land and sea adventures by borrowing names and places mentioned by Beccari such as Labuan, Sandokan, Monpracem, Rajà White and Sarawak. This writer was Emilio Salgari.