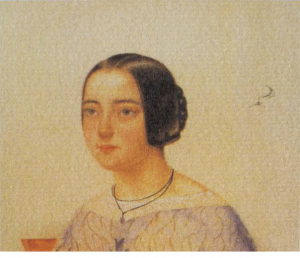 Emilia, born Toscanelli in 1827, married Ubaldini Peruzzi, one of the most important figures of the Risorgimento and the Unification of Italy, Ambassador, Minister of Public Works and the Interior, and mayor of Florence.

A woman who was “intelligent and angelic, with her candid genuine eloquence outspoken speech villager and delicate witty remarks”, she knew how to gather the best political and cultural Italian and European society around her in her salons of Paris, Turin, Florence, Antella … and Viareggio!
Her favorite was the one in Villa La Torre in Antella – an ancient possession of the Peruzzi since the thirteenth century – where she stayed from May to October. Within its walls were greeted the patriots and the most illustrious men of the Renaissance as well as artists, writers, poets and musicians. Among the many visitors we remember Silvio Spaventa, Sidney Sonnino, Michele Amari, Fogazzaro, Minghetti, the tenor Tamagno and the painter Gordigiani.
If weather permitted, the salon would move “to the terrace under the moon of Antella” and she would go from one group to another, taking part in conversations with grace, intelligence and very often with advice. Since she did not withhold sagacious criticism even from the most cunning politicians, one day the king Vittorio Emanuele II said, “We would need one of these women for every city in the kingdom.”
Emilia gave no respite to guests who would receive the famous notes encouraging them to a new discussion or inviting them to resume an interrupted one a few days before. The atmosphere and the friendliness of the hostess were so engaging that it was difficult to shirk this engagement.
That salon gave life a few literary masterpieces and developed new ideas, “one would say Florence begins from Antella.” The frequent visitor Edmondo De Amicis – in love with the lady – wrote his Bozzetti Militari, Renato Fucini composed many of his most famous sonnets, Homberger wrote the novella Il Bamboccio and Gaetano Imbert developed his masterpiece La vita fiorentina nel Seicento (Florentine Life in the seventeenth century).
Emilia died in Villa La Torre on May 8, 1900 and, respecting her will, the body was covered with wildflowers from Antella and buried in the chapel. Ten years later, with a Ministerial Decree, the transfer of her remains to the basilica of Santa Croce in Florence was authorized next to those of her beloved “Baldolino” as she affectionately called her husband.
An extraordinary event for the 150th anniversary of Florence Capital will be held in Antella on 7 and 8 November 2015 to commemorate Emilia and Ubaldini Peruzzi. For the occasion, the booklet Lady Emilia and the salon of Antella has been printed.