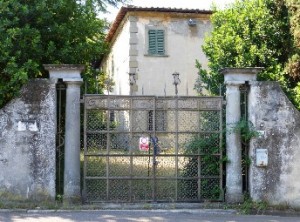 Perhaps not everyone knows that Don Lorenzo Milani, the Prior of Barbiana, could have been born in Antella.

On April 5, 1914, the Albano siblings, Giorgio, Pierluigi and Elisa Milani bought the villa and the adjoining farm Mona Giovannella (between Antella and Osteria Nuova) from Ernesto Nathan, the mayor of Rome.

For a long time the Milani frequented the area: their father Luigi developed the profession of archaeologist in search of Etruscan remains in the woods of Fonte Santa and their grandfather Domenico Comparetti was a loyal guest in the living room of Emilia Peruzzi in the nearby Villa La Torre.

The Milani, the Nathan, the Franchetti, the Levi and then the Rosselli were Jewish, like other wealthy families who had settled in the hills south of Florence, constituting a true protective enclave beyond San Donato in Collina with the Einstein. Albano Milani married Alice Weiss and with her and their first son Adriano they spent long periods in the beautiful villa – an old possession of the Peruzzi since the thirteenth century – where he remained until 1921.

So, Lorenzo – the second son of Albano and Alice who would become the well-known Don Milani – had never lived in Antella since he was born shortly afterwards, on 27th May, 1923. However, this does not lessen the importance of this news. Once again our wonderful hills a stone’s throw away from Florence have been the preferred destination of important historical figures either to reside there or for vacationing.

Even the Milani Comparetti family must have been amongst those important ones, given that for centuries they have produced academics and scientists. Lorenzo’s great-grandfather was none other than Domenico Comparetti, the famous philologist, professor, expert of twenty languages, senator and traveler. The grandfather was Luigi Adriano, the great archaeologist, numismatist, philologist and director of the Archaeological Museum of Florence who, among other things, took a particular interest in the famous Antella stele of the Peruzzi house and the famous Sasso Scritto (Written Stone) about which he wrote two reports in 1898 and in 1912. Albano, the father of Lorenzo, was a chemistry professor, poet and philologist. The brother Adriano was a doctor, a neuropsychiatry expert at international level. Don Lorenzo Milani … everyone knows who he was and what he did.