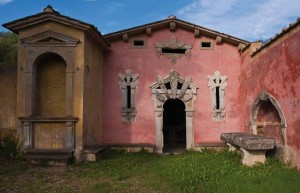 I am, oh reader, the Fata Morgana
as I have found youth here, so shall others
Here with the old man, just as I was once old
young I am now thanks to this fountain.

Many legends linger around the name of Morgana, the sorceress and seductive healer of Arthurian legend, and around this place where one hears of festivities and bacchanals during the summer nights and glimpses of young and beautiful women who then mysteriously disappeared, as well as the rejuvenating virtues of the spring water.

Fata Morgana’s spring was built in the second half of 1500, at the request of Bernardo Vecchietti, in the family summer residence.

The building, a rare example of garden architecture, is recognized for the fake pink brick plaster in contrast with the white Alberese stone doors and windows.

Inside, we are faced with a hollow-shaped fountain where the statue of the Fata was placed, which has unfortunately disappeared, made by the Flemish artist Giambologna who, at that time, lived in the neighboring Il Riposo villa owned by his friend Bernardo.

The mosaic floor is unique: made with white and black pebbles that, at the entrance, make up the word “Fata Morgana”.

A small aedicule of a tabernacle is placed in the garden, where a fresco attributed to Santi di Tito depicting “La Samaritana al pozzo” (The Samaritan Woman at the Well) used to be, which has also unfortunately, like the statue of the Fata, disappeared.

Route from the center of Bagno a Ripoli