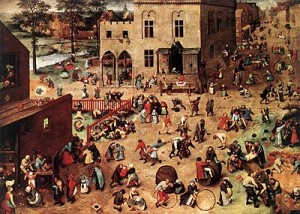 Following the course of the Isone stream, after the Antella cemetery, you come into a valley just below San Donato in Collina which still preserves naturalistic and historical aspects and some evocative names such as Val di Lucciole, La Granchiaia, pescaia di Bacchus, Gamberaia and borri del Mascherone e degli Abeti.

The age-old beauty of these places fascinated Francesco Aldana so much – “A gentleman salaried by His Catholic Majesty” of Spain – who wrote a long story in eighth rhyme, dedicating it in gratitude to Tirsi, that Jacopo Soldani belonging to the brigade of Antellesi Pastors who had kindly hosted him for a long time in the Villa of Belvedere which guards the valley.

The tale tells the story of the unfortunate love of nymph Antilla, daughter of the pastor Esone and the pastor Mompillo. Antilla is presented as an Aphrodite of rare beauty surrounded by splendid nature, with her hair loose in the wind and garlanded with flowers. Mompillo is irresistibly attracted by the grace, elegance and loveliness with which the nymph moves in the woods. The god Love strikes the two lovers and plays with them in a heavenly environment with Nature who participates and agrees to their idyll because, in this case, it is identified in the Earth: the mother of Antilla.

But if Antilla symbolizes fidelity and the purity of feelings, Mompillo represents human weakness who, in the beginning openly glories in his love, but then gives in to the lure of another nymph. Antilla, feeling betrayed, desires death and bursts into a long cry.

Mother Nature, in her boundless justice which governs the course of events in the world, transforms the abundant tears of the abandoned nymph into a stream of the purest water that gives life to a rich countryside and punishes Mompillo, turning him into a tough hill, wild and rugged, windswept and rocky, upon which flowers will never grow.

Clearly, the main theme of the tale is love but its author wanted to link the story to the myth of the origin of the Antella name. The Antilla stream is none other than the Isone which crosses and gives name to the Antella village and Mompillo is easily identified with Monte Pilli which overlooks from afar the fertile valley.