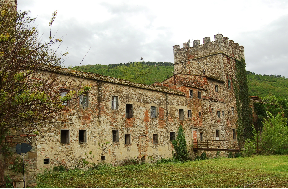 The Gualchiere di Remole are an important medieval mill that has preserved its impressive building structures, located a few kilometers upstream of Florence on the left bank of the Arno where two crenellated towers stand tall.

They were built in 1326 by the Albizzi for the fulling of woolen cloth. With such a process, the fabrics were heavily beaten with fulling mills (heavy wooden hammers that rose and fell on the patches) in stacks filled with a solution of water, soap, clay and a lot of urine that was brought daily from Florence.

This felting gave the cloths compactness, softness, durability and water resistance and allowed Florence to become a textile center of European reputation for the production of the famous Florentine cloth that made the fortune of the city. The wheels and the fulling mills were moved by water diverted from a weir and channeled into a gore and channels through windows that regulated strength and speed.

In 1541, the fulling mills were purchased by the Wool Guild which increased the number of stacks up to 19 with double fulling which worked for almost two hundred years in full swing.

The nauseating smell of urine and wet cloths and the deafening noise of the contraptions on the move made the environment rather hygienic, but the village was still full of vitality with a large number of employees.

Once the Florentine wool industry declined, the Remole establishments were converted into mills to grind cereals and produce cement and colors that had their greatest development in the nineteenth century for the greater demands of Florence, the then capital of Italy.

Even Ubaldino Peruzzi, in 1884, rented a water nozzle which he added to the other two he already had, “to establish a factory with a turbine for the manufacture of cements.”

In 1915, the whole village was acquired by the Municipality of Florence and began to live like a real village with mills, a grocery shop and a primary school which welcomed pupils from Rosano. Since 1980 the entire complex finds itself in bleak abandonment and “Let’s save the ancient Gualchiere!” is one of the many unheeded appeals which are read in the newspapers or heard in conferences and meetings organized to find a solution to the only medieval wool production facility remaining in Europe.