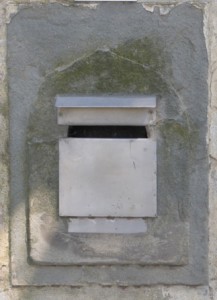 A large coat of arms of the Venturi in polychrome ceramic with the inscription Belmonte 1847 stands out on the facade of a building and announces that we have arrived at the farm, on the hill of Belmonte between Grassina and Antella.

Underneath a large square cellars had been created and next to the entrance door, carved in stone, is the Little Wine Window, now a letter box for mail. It is the only existing one in the Ripolese territory, but one of more than a hundred scattered throughout the city of Florence that we surveyed in a specific job.

It was probably made at the time when the farm was owned by the Magalotti (1590-1711) when the Grand Duke, with a Proclamation in 1559, had “allowed landowners to sell wine flasks, of their harvests, only at the house of their habitation.” The sale was through a little window specially opened on the outside wall of their mansions in the city or on farms.

This little window – also called the Buchetta, Tabernacle or Heaven’s Gate – had to meet very specific requirements (20 cm at the base and 30 in height) just because they could only pass through containers of a controlled capacity, first of all the bottle, the so-called metadella. The hole was closed with a wooden door which would be knocked with an iron knocker to call the butler, but you could not go whenever you wanted as there were opening hours to be respected, with severe penalties for offenders.

Of course, this retail selling system that lasted until the nineteenth century provided tax breaks for the producer who could only sell “his” wine and controlled prices for the consumer who could buy the wine without reloading applied by intermediaries such as keepers, innkeepers and vintners.

The former farmhouse Magalotti and then Venturi Ginori Lisci Torrigiani boasted a winemaking excellence with “precious wines from different methods,” sought after even for the bishop canteens such as the sweet Mammolo (remembered by Francesco Redi), the Purple Red and the renowned Absinthe dell’Antella.

Surely, the best vintages were served in 1796 when Anna Testard – wife of Ippolito Venturi – gave a reception with a gala ball in the Villa of Belmonte in honor of her friend Josephine Beauharnais, the young wife of Napoleon Bonaparte who, committed to the Italian Campaign, was unable to attend.