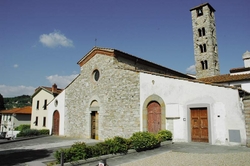 The Church of San Donnino is a clear example of medieval architecture which dates from the eighth century and many of its original features have been maintained until today.

The building has been restored and completed over time with the San Michele altar and the six-story high bell tower.

The interior is decorated with fifteenth century frescoes, and there are numerous works of art such as the altarpiece by Francesco Granacci, a painter native of the area, depicting the Blessed Gherardo with a sprig of cherries, and it is in this place that the remains of the Blessed are preserved.

The parish church is only open during religious functions.