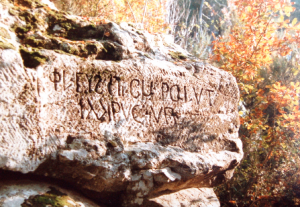 That which is known as the Sasso Scritto lies along the via Maremmana at the Poggio Firenze and, watching it attentively, provokes disturbing mysteries.

On a large rock emerging from the bush are engraved some Etruscan letters on two lines. It is an original in situ or a fake? It is old or recent? Are they really Etruscan characters or are they invented? And what do they mean? To these questions have been given the most fantastic and extraordinary responses.
After years of research the mystery has been unravelled.
The Sasso was discovered by the stonemason Alessandro Pettirossi from Fiesole who, since 1667, was looking for stone materials for the renovation of the Villa Mondeggi of Count Della Gherardesca and for Villa Lappeggi of Cardinal Francesco Maria Medici.
News of the discovery spread through the academic circles in Florence and experts from all over rushed to study the inscription. After Filippo Buonarroti followed Cosimo Della Rena, Lorenzo Magalotti, Anton Francesco Gori and many others until, in the mid-eighteenth century, it was decided to take the inscription away to bring it to the Corridoio Vasaria (today known as the Archaeological Museum of Florence) because it is “worthy of being among the rarest.” Instead of the original, dating from between the fourth and third centuries BC, a copy was made; but the stonemason made some transcription errors.
However, it is a rare ‘tular’: a boundary stone which established the territorial boundary of an Etruscan town and which was placed on the spot with a religious ceremony dedicated to the supreme god Tinia.
The inscription could be read as: “Sacred border of the community between Fiesole and Volterra among the people of the Auli and the Cursini”. So, not only a border between the two Etruscan towns but also among the tribes of Aulena (today Lucolena) and Cursinianu (today known as Corsignano) between which relations may have been strained.
In 1974 an exciting new discovery was made: in the nearby ditch of Calcinaia a smaller memorial stone with an identical text to that of the Sasso Scritto was found. It was named the Tular di Gavignano and, after a brief on-site exposition at Casa I Loti, was placed in storage at the Archaeological Museum of … Castellina in Chianti! It would therefore be appropriate that the two findings were returned as soon as possible to Bagno a Ripoli.