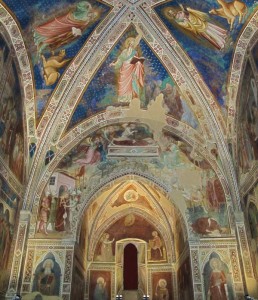 Prepare to be speechless once you have entered the Oratory of Santa Caterina, do not be fooled by the simple-looking and bare exterior, because a richly frescoed interior awaits you!

The oratory was built around 1354 at the request of the Florentine family the Alberti who decided to dedicate the chapel to Santa Caterina d’Alessandria.

The frescoes that decorate the interior were carried out in two different phases. The first phase was during the mid-fourteenth century, during which the chapel was painted by the Maestro di Barberino, an Orcagnesque painter, and Pietro Nelli, an heir of Daddi. In the apse, from top left to right, the martyrdom of Caterina is narrated: before the pagan Emperor Maxentius, Santa Caterina refuses to renounce the Christian faith and disputes with some philosophers who, instead of refuting, are converted. The girl is whipped and put between two sprockets, for the torture that should give her death, but the angels break the instruments of torture and save her.

The pictorial series was completed twenty years later at the behest of Benedetto di Nerozzo, a leading member of the Alberti family; however, he was forced into exile for involvement in the power struggle with the Albizi, and, unable to take care of the Oratory, he wrote in his will that the burial of Santa Caterina be represented in the chapel.

Spinello Aretino, a painter from Arezzo and well established in the late fourteenth century, was thereby instructed to continue the decoration of the triumphant arc that had been interrupted, in order to complete the story of Santa Caterina’s life, inserting eight episodes.

With the decline of the Alberti family, the Oratory also began a long period of decline, to the point of becoming an operations base for the British army at the end of World War II, a deposit for agricultural tools and even a chicken coop!

The Oratory was then purchased by the Bagno a Ripoli Municipality and after two years of work to restore it, was converted into a prestigious venue for events, weddings, art exhibitions and cultural events, exhibitions, concerts and seminars.