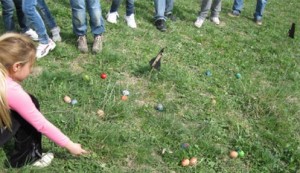 On the morning of Holy Saturday, the older children of Antella and Grassina, in a clay pot, brought the blessed fire to each house of the respective villages. With a tablespoon of the hot embers, coals in the fireplace were lit for the Passover rite.

Each family thanked these young “carriers of fire and faith” with an egg or a shoestring. In the evening, young and old would gather around the kitchen table to color the eggs that the mother had already boiled and hardened.

Painting the shell was a real playful ritual that was done with maximum effort trying to create the most beautiful design with figures, birds and flowers. Some people even wrote their own name.

On Easter morning, the painted eggs were brought to the church to bless them, and were kept until Easter Monday when people would prepare to make a trip to the countryside. There were two mythical places with lanes and meadows upon a light slope to play “a ruzzolino” (rolling): Fattucchia for those from Grassina and Il Leccio del Ginori for those from Antella.

The game was a real race which consisted in rolling the egg from the top of the climb to the finish. At the start, you were allowed to give it a gentle “biscotto” (nudge) with your fingers to help it go down faster, then you would follow it step by step down the descent shouting excitedly. Those who arrived first were rewarded with small gifts.

Very often, along the way, some eggs banged against an outcropping rock and, upon getting cracked, was declared out of play and the designs made with such care on the shell ended up in shatters on the grass. The game ended with a cheerful snack … and at that point all the colored eggs were eaten with a pinch of salt and a slice of bread.

It seems that the blessing of the egg for Easter goes back to ancient pagan rituals which considered the egg a metaphor of perfection and a symbol of birth and life, rituals then adopted by Christianity with the same meaning. Today, the tradition of the rolling egg in Grassina and Antella has disappeared, but older people remember having experienced it with joy.